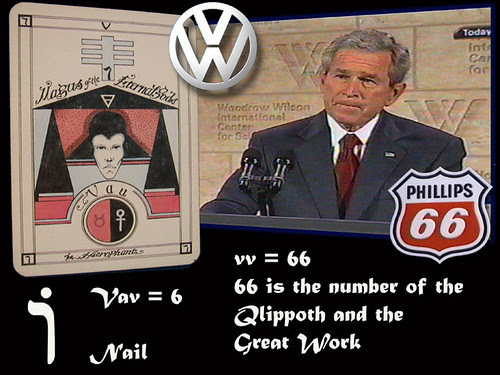 ...and the V's have it!
“…this valorous visitation of a by-gone vexation, stands vivified, and has vowed to vanquish these venal and virulent vermin van-guarding vice and vouchsafing the violently vicious and voracious violation of volition.” V

This is no vacuous vacation from veracity; the V’s value is no vamp in the vision of the votaries which vilipend the virtuous; those viral visitants vacant of virtue..

This V of Vonage venerates lascivious union; a veiled violation of virginal vanity. A V revealing a dot visiting between the legs is a variant of the very point within a circle voiced below; a vas deferens vessel and a vulva.

Visa’s V is vandalized by a viscid fluid with the entrance of the yod; a virile votive vouchsafing the virgin’s violation.

The V of VH1 verifies the veracity of its usage. The VH1 rests on a cube: a vestige of the vole’s viatical vow to venerate the “perfect ashlar”. The V is a symbol of the virgin, the H is a symbol of the Emperor, and the 1 is a penis. Variform Masonic symbolism replaces the G in the vaginal oblong square, formed by the compass and square, with the Hebrew Yod; a tongue of fire representing virility. This is no verbigeration of out-dated vernacular. 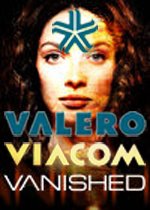 Valero veils the Masonic compass and square in the letters VA, as does Viacom and the action TV show, Vanished. The vicissitude of Valero’s symbol from the “tri-diamond” to the V, when viewing the commercial, varies from the infinity symbol (a symbol of the magician), to an X (another coded hexagram), which then becomes a V.

The V is not long standing before a vermicular intrusion drapes around its legs. Of course, Valero’s earlier logo is a pentagram formed of five V’s.
Venus Express of the European Space Agency canted the square to venerate that vessel of knowledge, Pythagoras. I’m truly curious to see what anomalies Venus unveils to this mission. Of course, NASA has countered with the Orion mission.
It’s interesting to note that in the Tarot, V is the Hierophant, the Magus of the Gods. He takes on the essence of Venus and Mercury; the hermaphrodite. Knight and Lomas, in their work, “The Book of Hiram”, equate the union of Venus and Mercury with the Shekinah; a Hebrew form of the goddess. We see the same symbolism over and over.

Verifibly, this was envisioned by the developers of Volvo's viva to Mars and Venus; being a vulva with the virility of Mars. 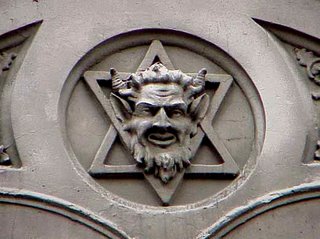 The hexagram of Israel has the same connotation. There is one triangle over another and sometimes interwoven, one black, one white. This is the same symbolism displayed in the goddess holding one arm up and one arm down. This is the symbol used by the ancient alchemists to denote dark and light forces. The hexagram can also be found on the floor of Muslim mosques. The Hindus worship a supreme goddess known as Kali. To this day there are human sacrifices to Kali in hopes of gaining earthly wealth. Kali is worshipped on the cremation grounds and is a goddess of destruction. I’d call that a “Cremation of Care”.
Could this be the vainglory of villainous vampiric vermin verily vacant of virtue?
V for Vendetta’s contrivance to facilitate vengeful violence from a virtuous vantage verifies the villainy of the Wachowski Brothers.

Encoded within Village Roadshow's logo is 66; 6 V's making one V, once again, the sign of the fallen ones.

Taken a step further and one finds that Village Roadshow's partner, Warner Bros, uses a crest with WB. In magic, this would transliterate to magicians of the fallen ones. B is the letter assigned the Magician in the Tarot.
V Freeman Style 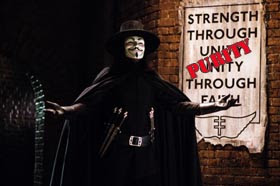 Remember, remember, the 5th of November
The Gunpowder Treason and plot ;
I know of no reason why Gunpowder Treason
Should ever be forgot
A penny loaf to feed ol'Pope,
A farthing cheese to choke him.
A pint of beer to rinse it down,
A faggot of sticks to burn him.
Burn him in a tub of tar,'
Burn him like a blazing star.
Burn his body from his head,
Then we'll say: ol'Pope is dead

Pauline Pierce was friends with Aleister Crowley, maybe more than friends. Pauline had a reputation of being a bit on the wild-side in the 20’s. It’s been reported that she and Aleister were in France together around September/October of 1924. Upon return to America and her boyfriend here, Pauline gave birth to Barbara Pierce. Fearing retaliation from James I, the Pierces changed their name from Percy to hide from their involvement in the “Gun Powder Plot” of 1605, starring Thomas Percy, Robert Catesby, and, of course, Guy Fawkes, the fall guy. We actually get the word, guy, from Guy Fawkes. He was also known as Guido, but I digress. The “Gun Powder Plot” was designed to make James I of Biblical fame, harsher on the Catholics, for he was the target of all that gun powder. With a few plot twists, Lord Robert Cecil, the Earl of Salisbury and Venetian Intelligence, councilor to James, informed him of the plot. Cecil was behind the plot. Guy Fawkes took the fall. He was the Timothy Mc Veigh of his time.
For those of you that believe it would make an impact to dress as this patsy, it would do better to use your own imagination rather than that provided by the magician's wand.
Even now, few understand that plot: Guy was no fox but a dupe ensnared by the chief minister himself in a madcap scheme to blow up King and Parliament. The real plot was royally successful: to invent a pretext for war with Spain. This fraud was the foundation of the British Empire.
Fawkes was discovered and arrested during a raid on the cellar in the early morning of 5 November. Catesby and Percy were cut down in the process and killed on the spot. Guy was immediately taken to the Tower of London and tortured over the next few days, after special permission to do so had been granted by the King. On 31 January, Fawkes, and a number of others implicated in the conspiracy, were tried in Westminster Hall, and after being found guilty, were taken to Old Palace Yard in Westminster and St. Paul's Yard, where they were hanged, drawn, and quartered. Fawkes cheated this fate in a way: though weakened by torture, he jumped from the gallows and snapped his neck rather than being hanged until almost dead.
Quite simply, all the fireworks are to celebrate the torture and execution of Mr. Fawkes, who, along with several other Catholics, conspired to blow up Parliament…or did they? It seems that the “gun powder” was corn powder and would not have exploded. The “Hidden Hand” was behind the works and the Wizard of Oz is… 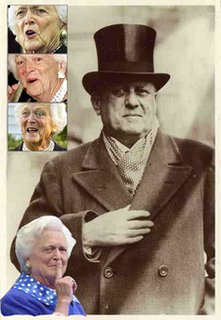 Lord Robert Cecil, the Earl of Salisbury and Venetian Intelligence. Venice needed England to war with Spain to keep the money rolling in. They were the CIA of their day. So why did I start this with Pauline Pierce, you ask? Pauline Pierce, after sexcapades with Aleister Crowley, gave birth to Barbara Pierce who became Barbara Bush, who gave birth to none other than, George VV Bush, Aleister’s grand-son. Barbara Pierce is a descendant of President Franklin Pierce, Sr (not a Freemason), who is a descendant of Thomas Percy who tried to blow up the Parliament and King James I. Franklin Pierce lost favor over wanting to keep slavery alive and was replaced by James Buchanan (Freemason) who is a descendant of James I and both James are accused of being homosexual.
You couldn’t make this stuff up!
And what revelation does this tale of V portend? These vilest of villians will get you to do their dirty work and kill you in the end for the vacuous endeavor of making slaves of men.
False flag, state sponsored terrorism, don't do it!