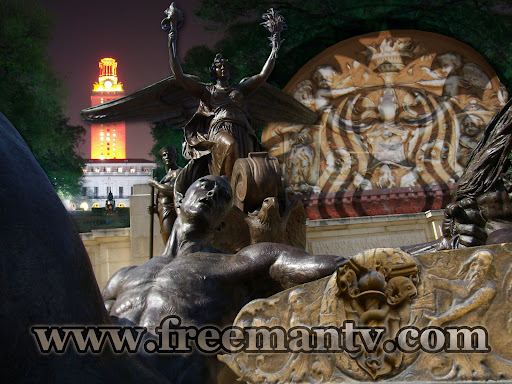 On the Freeman Perspective we have been investigating the occult
agenda of those creating our future. We all watch as they perform
high-profile rituals like the Y2K ceremony where they introduced the
"Age of Horus"; the Age of the Vengeful Hero. In the signs and
symbols, we have found a story. I want to flesh out this story.

The new season of the Freeman Perspective begins October 2nd
Thursdays at 10pm on channel 10 ChannelAustin and then on www.freemantv.com
This season already looks exciting. I seek guests that are rarely
promoted, ideas that are not even considered. We will explore the path
leading to 2012 with such people as, Dennis McKenna, to examine our
minds, Ted Whidden, to release ancient secrets, and get follow up
reports from Paul Laffoley and, Rex Church.
I have a lot of new footage and pictures to share with you. We are
beginning to unlock the secrets of magnetism as it relates to magic
and Freemasonry. And, of course, we will be talking with the Mayan
Shamans to understand time and the events leading to 2012.
My goal has been to highlight the motivations of the New World Order
beyond the obvious attempts at control. I have been driven by the
question, why!?
There is much to be learned about our own potential and trail blaze a
path to a new paradigm void of fear and mistrust. We will learn to
love one another again as we see the spectacle that is the spell of
the Illuminati.
The studio has all new television equipment. I'm going to use every
ounce of its creative potential to bring you a thought provoking
exploration of our world on a level not seen before!

Radio Freeman will return on Oracle Broadcasting Network Saturdays at 10pm CST.
and on Revere Radio Tuesdays at 6pmCST