Obama is not a natural born citizen, "W" stole the election, 9/11 was an inside job.
These are all conspiracies within conspiracies. Patriots, you are being played. 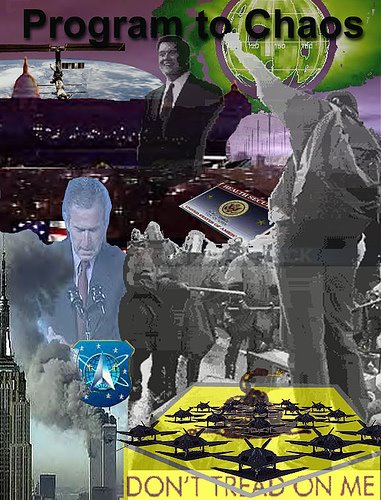 In 2001, I created this artwork. It shows Bush over the Twin Towers, the supremacy of the U.S. Space Force, HAARP and solar storms, Tom Ridge taking position in Homeland Security and giving you a National ID card and the uselessness of political protest.
9/11 was meant to be obvious. It was meant to divide the people on many levels and, I guess, in a way, I predicted Alex Jones, as well. I had told a group of friends that now that the “W” has been placed in office, “they” will need a terrorist attack to finally pass the Homeland Security Act coming in October. I told my friends “There will be a major terrorist attack on September 11th. Don’t panic. This is all for your reaction.” Meaning, don’t become Alex Jones. They want you to spread fear and hatred. This was an act to create division on many levels. Some people are not able to accept that their government is insidious or the realization that they have no security. Screaming at these people, calling them derogatory names, only exacerbates the situation. This leaves people nowhere to turn except killing one another.


In 2006 I posted an article titled "Program to Chaos". I outlined my projections of the road to WWIII leading to the Holy Masonic Empire.
In 1998 a "conspiracy theory" spread across America and the world. Our President, Bill Clinton, had had an extra-marital affair. The war cry began, "Impeach the President!" There was no such public cry over the Oklahoma bombing nor over the massacre at Waco. Patriots rallied about these attacks on our civil liberties; being led down a path to "fight the New World Order".
We began to hear of such organizations as, the ATF and FEMA and there was a rattling about a coming Homeland Security. Few had heard the name Tom Ridge at this time. Fewer noticed AOL's opening poll: "Will you take a National ID Card?"
These topics have been on the minds of Patriots for a long time. People have been preparing for warfare.
I feel the Patriots are missing the bigger picture. Propaganda preys upon your ego. They have convinced you to be proud of your nation; their method, blood sacrifice i.e. war.
Through sacrifice of our sons and daughters a corporate oligarchy has convinced us to continue their agenda, a global fascist dictatorship run by a priestcraft.
On the road to fulfill the “Great Work”, nations must be created and destroyed. They need you to do this.
The destruction of America was designed before it was created. Its destruction is to have a psychological effect on the rest of mankind. Freedom leads to tyranny...or so they will say. Just look at what America did. It's all a stage act and you are the players.
To convince you to play they perform acts of prestidigitation (stage magic). To bring the President in front of the world and charge him with an act that most consider common, an affair, is to incite a reaction.
First, destroy the idea of the President being a great man. Make him look small in the public eye.
Second, destroy the concept of a free society by "stealing" the election. "W" being forced in by Jeb Bush was to incite a reaction. You are supposed to lose faith in the system.
Third, bring in a President that is not a natural-born citizen. 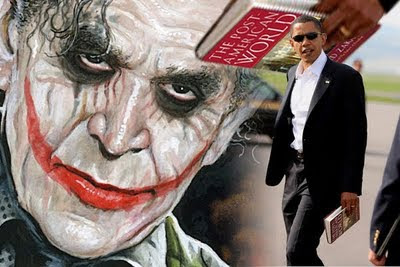 As you can see in this quote, "My prediction before 2000 was that, "W" will be president no matter what, and it would best serve the brotherhood if he was railroaded into office, and that he would be the last American president." I knew the next President’s legitimacy would be questioned. I wrote this in 2006 but, I stated it in 1998. For over a decade I have outlined this script.
The idea of Obama not being a viable candidate for the Presidency is a conspiracy within a conspiracy. You are supposed to be up in arms about this. This is to open a Constitutional Convention. It is not to take Obama down. It is entirely possible that the Obamas will never leave office thanks to H. J. Resolution #5 which could rescind the 22nd Amendment removing limits to the terms of Presidency.
While demanding to see Barack Hussein Obama's birth certificate, you might want to ask why you have a birth certificate. Understand that you are owned and operated by a multi-national corporation and they need you to build this New World Order. They need you to react to the play they are performing. The revolution is manufactured.
The Mystery Continues

H.R.1503 - 3-12-09 Presidential Eligibility Act
To amend the Federal Election Campaign Act of 1971 to require the principal campaign committee of a candidate for election to the office of President to include with the committee's statement of organization a copy of the candidate's birth certificate, together with such other documentation as may be necessary to establish that the candidate meets the qualifications for eligibility to the Office of President under the Constitution.

PHOENIX (AP) - 4-19-10 The Arizona House voted for a provision that would require President Barack Obama to show his birth certificate if he hopes to be on the state's ballot when he runs for re-election.
Phoenix Democratic Rep. Kyrsten Sinema says the Birther Bill is one of several measures that are making Arizona "the laughing stock of the nation."

HARLEM 5-14-10 CIA Columbia Obama Sedition and Treason Trial
Hon. James David Manning says Barack Hussein "The Long Legged Mack Daddy" Obama was a C.I.A operative who used Columbia University as a cover to go to Pakistan in 1981 when the CIA and the Mujahideen worked together against the Soviet Invasion. Obama supplied arms, logistics, and money using his Muslim background.
Posted by freeman at 7/21/2009 04:27:00 PM