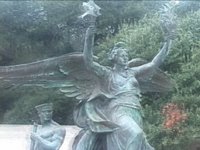 Christine to me
My then future sister-in-law told me over 15 years ago how the clock tower at UT Austin looked like an owl when viewed from an angle. I asked her why that was, and she said, "Well, you know, it's an institute of higher learning and the owl symbolizes wisdom." For years after that, whenever we would drive in to Austin to visit, I would look at the clock tower and think, yep, it does look like an owl.

In Sept 2000, we moved to Austin to find work and after several months discovered Alex Jones. We saw his video on Bohemian Grove and how the owl was one of the elite's symbols. It never struck me until I was driving around Austin, looked at the clock tower and realized it was a symbol of the elite. At the time I didn't know about UT and it's reputation for being a place that the CIA recruits from and the fact that the Church of Scientology has a HUGE reading room across the street from the campus (makes you wonder how much rent they are paying for that prime piece of real estate). I spread the word about the UT clock tower owl to the people I met from There4Iam and Esoteric Science Roundtable's metaphysical study group meetings before the Frost Bank building was built (an owl/obelisk). I am amazed at how people have latched on to this phenomenon in architecture, but symbolism has to be one of the most fascinating subjects I have ever looked into. I recommend that everyone take a semester of introductory psychology (or better yet, find an older used textbook). When it hits you that humans learn by example (what we see and hear), you'll understand how easily the human psyche is manipulated if you are not paying attention to what is going on around you.

I love your show, Freeman. Keep up the good work!

P.S. It seems that every guest you have had scheduled has some issue that delays their appearance (either personal, or PACT issues). Do you think somehow that they are being interfered with so the audience won't be watching when they are re-scheduled? I was worried about Texe Marrs' delay and now Jon Rappaport's...am I being too paranoid?

Freeman to Christine
:) I feel it too. I've described it as holding the head of a serpent while trying to get past its writhing body. It's been incredible. While Texe was working on his book many things occured. While I compiled the images for his show, I wondered when too many satanic symbols would be enough. I had 2200 images in my file. I was importing the last few and my computer froze on Jack Parsons,

certainly the most sinister man recently. I turned the computer off like I do at times like these and when I returned, all my images had vanished into thin air. I already had troubles getting film out of my computer. I had to ask a friend to export my film from his computer. This should have taken an hour or so. It took 4, the show was that evening. I needed to run to the bank. On my way back to my friend's place, my brakes seized and my car is still sitting there. Currently, I was working on a visual display for tonight's show and using the computer for reference while doing a podcast interview. The power cord has been shorting out, my battery was almost dead. I tried to fix the cord and blew up my computer. It's dead. So, I have no film, no car, and no computer. I will go on! Tonight's show with Jon Rappoport should be very telling. I had told people month's before 911 that an attack would happen on that day. their response afterwards was markedly different from those who were not around me. I hope the same results will occur from Jon's revelations. Thanks for the comments. I love to hear from you. Write back soon.

Simple questions like why are there 60 seconds in a minute can open pathways of thought never recognized. I started this adventure when I asked the simple question, why is there a pyramid on the dollar bill. The floodgates opened. We are always on this quest even when we don't realize it. We all know something is wrong. I've begun questioning what is right. Everything is filtered through the brethren; our great ideals of truth become lost. Can America really look back to a constitution that was created by this brotherhood? So, we look to what they are doing to try and discern their motives. Most believe world domination is their end goal. Has this same bloodline not ruled since at least Babylonian times? They obviously need us to accomplish the "Great Work", what is this? Well, what do we do as a civilization? We create technology and mine resources like gold. This is what we have always done. I believe Michael Tsarion when he says they are trapped here and want to get away. Our "leaders" have always been wrapped in the occult. They speak of opening portals or dimensional rifts. They tell of using spirits to do their bidding. They act as if there is no cost for this. Just join and you'll be taken care of. All you need do is swear a blood oath to our god. Most people no longer believe in a spirit realm and can take these oaths with a grain of salt because they believe there is no consequence. Another constant theme for the brotherhood, through out time, they have sought eternal life; The Tree of Life, et al. They know people can live a lot longer than we currently do. Cloning has become a big issue for them. The longer you live, the longer you get to keep hold of your soul. They don't want to pay the piper. We can only judge them by their actions. It's hard to tell Americans that George Washington was not there to spread freedom, but we can see now, that he was not. So, it is actually the way that we perceive the things around us. We know humans should not be starving on earth. Why are they? All of our governments and our learning institutions are designed to help only one race on earth and it is this bloodline that traces its roots back to the gods. They are the few, we are the many, but we need a new dream. At this time, they seem to almost have what they need to control our every action. They have barium in our skies, and the chip is there, waiting, not to mention concentration camps. The astrological timing is correct; they have been working towards this point for many millennia. We don't recognize it, because it is all that we have known. Humans seem to be reaching a new plateau. I think of it as a 13,000-year night and a 13,000-year day. We are living in a dream world. We are waking up into a new reality. They do not want this. Frequency modulators have been set up around the globe. In America it is called HAARP. The fear is being heightened so we cannot reach our higher selves. A letting go is actually in order. We do not need to rebuild governments or reorder constitutions. We need to turn our backs to these black nobilities. Focus on what's human and just do it. All avenues have been set with traps. For example the Grateful Dead are a pied piper set up to lead free thinkers into the open. Everything at the top has been through the filter. If it serves their purpose they let it go on. What we do right now in their world, i.e. the "Real World" won't matter much soon, I believe. I'm certain that WWIII is right around the corner and it will involve all the things we connect with the apocalypse, including aliens. I believe this will be a show just like 911 or if you follow my drift, like all the wars of the past. They don't kill one another. Then, as always, they will offer up the solution. The very beings causing all the problems will then present themselves as the saviors. Remember, that it must all be of your free will and accord. We are so powerful, that they go through all this to use that power.
Posted by freeman at 12/19/2005 10:00:00 PM