On 10-13-10 a massive UFO display was seen by thousands in New York City. The event lasted all day and reports began to surface of sightings all over the world. This coincided with predictions made by retired NORAD director, Stan Fulham in his book, Challenges Of Change.
10/13 Bigger Than 9/11 4 years of 10/13 reports by Freeman

Tonight, 10-14-10 at 9pm CST Truth Frequency welcomes veteran researchers and UFOlogists – Jim Marrs and Freeman to discuss the event. Was it prophecy fulfilled? Are aliens real and visiting us? Or is this simply a government psy-op? 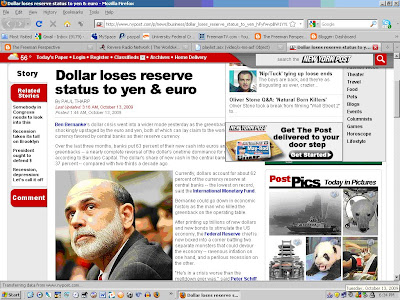 10/13 2008
On the morning of 9/11 2001, I awoke to a throng at my door demanding, “How did you know!?”
I replied, “Know what?”
I had neither television nor the internet; I had no idea of what these people were talking about; a terrorist attack? Really!?
I had told all of these people to be prepared for a terrorist attack on 9/11 2001 but, I had no calendar. I told them not to be afraid. It was all to cause a reaction and pass what I knew of as, “The Homeland Security Bill”.
How did I know?
I’ve told this method on many shows because I feel it’s important that you see what I was seeing. I seem to be on to something.
I see the acts being displayed around us as ritual magic and this seems to explain the actions of our leaders more than politics alone.
Now, I have highlighted 10/13. This is not a prediction. This is an Illuminati watch not a warning. I saw the difference my guess had made in those that heard me before 9/11. I wished I had known more outlets to tell people but, as I say, I didn’t know I was right. I was testing a hypothesis.
I took a gamble and highlighted a date for a world changing event.
This is dangerous for one that wants to keep his credibility. I felt
it necessary to take this risk to further unveil the matrix we live
in. 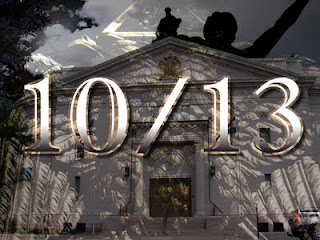 I highlighted 10/13 because of its Templar connection and this
connection to the White House Cornerstone.
I talked about it at Brave New Books 10/13 2007

Consider that on the Pope's birthday he was celebrating with W at the
White House. On Hitler's birthday, the Pope visited ground zero and
gave a speech asking for eternal light. On Friday the 13th, W met
with the Pope in St. John's Tower at the Vatican. This was highly
irregular. The Templar and Masons worship the St. John.
Friday the 13th is infamous because on Friday, 10/13 1307 the Pope and
the King of France burnt the Templar at the stake. Just for a bit more
synchronicity or ritual, Washington DC was purchased from a man named
Pope and the land was known as Rome.

Now, on 10/13 we have the biggest banking scandal this country has
ever known. Soon, 10/13 will be known as an event surpassing 9/11 for
tyranny.
10/13 is a date that involves the banking industry being that the Templar started the banking system we know today. Some, like Michael Ventura are saying,

Bigger Than 9/11: On Monday, Oct. 13, Secretary Paulson and Fed Chairman Ben Bernanke invited the CEOs of our nine biggest banks to a meeting in Washington, D.C. The CEOs were not told why. "To their astonishment, they were each handed a one-page document that said they agreed to sell shares to the government, then [Paulson] said they must sign it before they left" (The New York Times, Oct. 15). They argued, but they signed. The article goes on to note that "just days earlier" Paulson had vigorously rejected this plan. "Analysts say the United States was forced to shift policy [my italics] in part because Britain and other European countries announced plans to recapitalize their banks and backstop bank lending. But unlike in Britain, the Treasury secretary presented his plan as an offer the banks could not refuse."
History will record this crisis as more important by far than 9/11. The 9/11 attacks left us with many choices. We chose badly (the PATRIOT Act, the invasion of Iraq), but we did the choosing. The world begged us to do otherwise. We told them to shove it. But when Sarkozy says, "We want a new world to come out of this" (Newsweek, Oct. 20, p.25) and Germany's finance minister adds that "America [will] lose its role as 'financial superpower'" (The Economist, Oct. 2, p.55) – that's the sound of a fat lady singing.
The economic future of the United States is no longer in the hands of the United States.
Letters at 3AM
Bigger Than 9/11
BY MICHAEL VENTURA
Would you like to know more? Freeman on Oracle Broadcasting Network