We should get this straight now, so that there is no more confusion. The owl being displayed by the illuminati is not Molech(moloch). This I hope to put to rest, here and now.
If we consider the symbolism used by the brotherhood, the symbols most prevalent, go to the goddess. In America, we call her Columbia. In England she is known as Brittania, hence British Columbia. In the past she has been known as Semiramis, Ishtar, Anat, Asherah, Isis, Juno, Minerva, Aphrodite, Venus, et al. Now, let's look at the goddess symbolism. She is known as a triple goddess, trinities relate to her. In the Tarot the 3rd major arcana is the Empress. She is symbolized as a phoenix rising and is known as the eye goddess. As Venus, she is symbolized by a shell and a pentagram. Most of the goddess' have connections with the merfolk.
Isis in the egyptian pantheon, is a symbol of Sirius, a recently re-discovered trinary star system. It has been shown through history that there is a connection with Sirius and fish-people.
Finally, the goddess is represented by an owl. You will find numerous depictions of the goddess with her owl. Some say that this is due to the correlation between Sophia(wisdom) and the wise old owl. I don't know. What I do know is the goddess has always been depicted with an owl. Molech is a bull. He is a minor deity with possible links to Baal. Now if Baal had been suggested I would give it more thought, and I have. we'll come back to Baal. 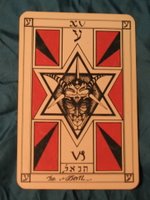 OK, here we go, abc does not have a logo because the trinity is the logo, NBC is the phoenix replaced by the peacock because of the eye symbolism on the tail. CBS, Columbia Broadcasting Systems has an eye as its symbol. Interestingly the eye in the tarot is the letter ayin which is the Devil card in the major arcana.
Venus is known as the "star of the morning" which is Lucifer in the Bible. A lucifer is also a friction match. Phoenix pictures strikes a lucifer(a friction match) and it becomes a sun low on the horizon and then burns up to a fiery phoenix, Lucifer, uh, I mean Phoenix, Pictures' movie content includes: genetic manipulation and cloning, child labor camps, and nazi worship. These films feature such stars as Schwartzenegger, Sigourney Weaver, and Stephen King, and are in association with Columbia, Tri-Star, and Disney! Hmmm. But I digress. 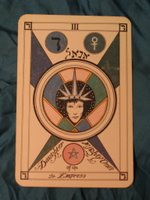 The Star of the morning is symbolized by a pentagram due to its travels when viewed from earth. It makes a five-pointed star every 8 years. Venus is symbolized by the shell because of her connection with the life-giving sea. Therefore, Texaco has a pentagram and Shell has a shell. It is goddess reference and this goddess represents Sirius... where the fish-people are from.

Let's continue. Sysco's symbol has a cube for the shape which symbolizes man perfected, within the cube are the letters SYSCO. The Y forms the cube, the cube and SS spell Isis, and the CO make the moon and rising sun symbol(the same symbol you will see on the New Orleans Police cars) of the goddess.
Our capital is the District of Columbia and the White house is surrounded by an owl connected to a pentagram. Of course this can only be viewed from space. The capital dome in DC has the goddess on top and the dome itself is a symbol of the goddess. Here, in Austin our Columbia holds a pentagram, in Galveston as well. The phallus symbol of Osiris(Orion) is always secondary to the goddess Isis(Sirius). In Denver, the goddess is on an obelisk holding the torch of Lucifer. The same for the statue of Liberty that was designed by the mason, Eiffel, who crafted the large phallus for the brothers in Paris. 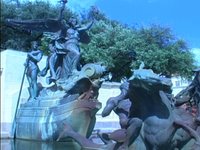 Here in Austin we have a phallus clock tower with owl features, standing due north of the capital dome on top of which stands the goddess, holding a gold pentagram. In between these two symbols stands the goddess with angel wings, on a boat being drawn by fish-people. To her left is a pentagram and to her right is a shell. Next to this building is the Harry Ransom Center which houses the "Book of the Law"; a book Crowley channeled from an extra-terrestrial Atlantean named, Aiwass. This book made Aleister Crowley the most infamous magician in the world. Because we are talking about magic here, are we not? Rituals, incantations, groves... 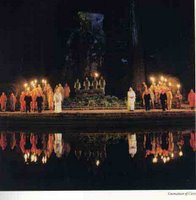 Bohemian Grove was infiltrated by Alex Jones and although I thought he should have trusted his "Jedi" powers more, I admire the man for what he, and Mike Hanson, did. Unfortunately, symbolism was not high on Alex's priorities. I understand he has his mission to fulfill. So, in steps Freeman, to attempt to fill in some gaps and correct this one error. You are not witnessing the worship of Moloch. In the Bible Asherah is translated grove. Asherah is also the Biblical version of Ishtar, who is Isis, which represents Sirius. What you see before you could be signs of allegiance to our extra-terrestrial progenitors from Orion and Sirius. This planet and its resources could be the property of another race and the secret societies keeping it all in line. It is well known that NASA is constructed of nazis and freemasons. If you look into such things. The symbol the masons use for Sirius is known as the blazing star. It is a pentagram on fire. Not to be confused with the pentagram of Venus, which is not blazing. This is the symbol on NASA. The space shuttles names run the Columbia Endeavor for the Discovery of Atlantis and all Challengers will be destroyed. There were others sacrificed to Columbia as well. Have you ever wondered what a space shuttle is shuttling? Where did the $30 million in gold, under the towers, disappear to, after Cheney's trucks cleaned up the mess? Now, you know why Columbia docks with the ISS. It's always been about the gold.
Happy Ishtar!