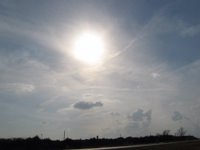 I had quite a time in Tucson. I met hundreds of people. I pointed out the chemtrails to many people. I would actually predict what was going to happen. I would tell them that the trails would be light during the week and heaviest during the weekend. This is because the trails are directed at crowds. I told them that after a heavy day you could expect the temperature to drop dramatically, then the following day would have super-radiant sun. All these things occured just as I had said. I told them of the symptoms that they would be feeling; first you will feel tired, very tired, then a bit of nausea, followed by aching joints and a fever. Many thought they had food poisoning or the flu. I taught the healers that they were dealing with heavy metal poisoning and not a bug. I hope some will take heed and find us a chemtrail cure. My DVD was flying out of my hands into those who could use it. I spoke with at least a dozen people with chem-trail sickness. The military also made quite a presence in the skies. I saw my first B2 bomber and "Warthogs" were flying patterns daily and the large helicopters with large guns kept us up at night. After the show had ended the jets stopped, the helicopters were gone and the chemtrails cleared up. Coincidence? While all this was going on around me, I still found myself in step with the divine will. Each friend I met would lead me on to the next. The only time I felt out of step is when I was sitting there working for an hourly wage. I found that my time is worth more than $10 an hour. I realized on this trip that I have a great many angels carrying me on my mission. Why even here in the 3rd dimension my helpers were Gabriela, Michael, Raphael, Gabriel and then Christian, Mark, Luke, John. It is a wondrous world we live in! I realized that I, too, was an angel in others lives. Strangely, or perhaps not, James Redfield, author of the Celestine Prophecies was lecturing in Tucson that first weekend. I felt that if all went right, I would run into him and get him on the show. That didn't happen, however, and that day was one of the most miserable I had there. I know now that I should have done something else, like find James. I won't say that his book changed my life, but it certainly confirmed my life for me. I learned on this trip how one can be pulled from their path by improper concerns. Yes, one can care too much for others. Sometimes, not helping is the best one can do. I was on a mission to learn to say NO! So, here's what I have gathered: money is an illusion leading us all astray. It makes us waste our time and is not an end goal in of itself. Making connections with others is what it's all about. This is why people go to a gem and mineral show. They want to meet someone interesting. The buying and selling are merely an excuse for us to get together. We are all angels doing our duty, which we love. We know when we have fallen off our destined path. We can be there for others and have all our needs met. You can bet on that! Life is truly more miraculous than most believe. To find the miraculous one must give up controlling and let the path unfold before them. It requires faith instead of money and it works! Friends are the most precious commodity out there, so don't leave them behind! Very soon we are going to need nothing but friends. Have you made one today? I hope all of you I have met will leave me a message. Angel does mean messenger!
"True liberty is the associate of genuine self-respect; false liberty is the consort of self-admiration. True liberty is the fruit of self-control; false liberty, the assumption of self-assertion. Self-control leads to altruistic service; self-admiration tends towards the exploitation of others for the selfish aggrandizement of such a mistaken individual as is willing to sacrifice righteous attainment for the sake of possessing unjust power over his fellow beings."
(The Urantia Book pg 614)
Posted by freeman at 2/16/2006 10:55:00 AM